On the 1st of November 1921 history was made at the Irish Bar. It was the first call of the newly fledged Irish Free State, the first to occur after partition and the division of the island of Ireland into two jurisdictions and the first to see women called to the Bar of Ireland. One of those women was Averil Deverell, a remarkable personality who would go on to carve out a place at the Irish Bar for future generations of women lawyers. 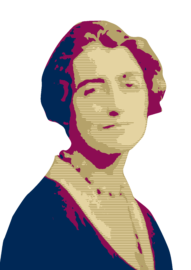 Averil Katherine Statter Deverell and her twin brother, Captain William Deverell, were born in Greystones on the 2nd of January 1893. The only daughter of William Deverell, a Clerk for the Crown and Peace of County Wicklow, and Ada Kate Statter Carr, the daughter of a wealthy London solicitor, she grew up in a family familiar with the ways of the legal world.

As a child Averil attended the ‘French School’ in Bray, where young protestant ladies from all over Ireland were educated. Whilst at school she indulged a love of theatre and acting, no doubt honing skills that would stand in good stead in the courtroom. She began her undergraduate studies in Trinity College Dublin in 1911, the same year she was presented at court in Dublin Castle to King George V and went on to receive an LLB in 1915. At this time there was a world war raging across Europe of which Ireland, as a country within the United Kingdom, was a participant. Averil had been encouraged by her father to learn to drive as a teenager and she decided to use this skill and apply to the Queen Alexandra First Aid Nurse Yeomanry for a position as ambulance driver on the Front. Initially, she had to pass a driving test in London, which she did, but because she was unable to “re-assemble a dismantled engine” they refused her entry. This stipulation was revoked six months later and Averil drove with the ambulance corps, serving in France from July to December 1918. (Bacik, Costello, & Drew, 2003)

On the 23rd of December 1919, the Sex Disqualification (Removal) Act became law. Though it did not lead to the full emancipation of women within society, there were still restrictions on women entering the civil service, their voting entitlements, and the types of juries they could serve on. It was, however, an important step towards providing a public space for women to engage in professions they were previously excluded from. Prior to the passing of the Act, women had made attempts to enter the legal profession, applying to the Law Society of Ireland and the Honorable Society of King’s Inns, but were repeatedly excluded, though no law formally forbade their inclusion. This was all to change and in January 1920 Averil entered the King’s Inns to study for the Bar.

On the 1st of November 1921 Averil, along with Frances Kyle, was one of the first women called to the Irish Bar. The call of the first two women barristers made headlines at the time, not just in Irish newspapers where they were referred to as the “Irish Portias”, but also in the London Times and the New York Times. Both women were called alongside 18 men, one of whom was Averil’s twin brother, Captain William Deverell. Though Averil was the second woman called to the Bar, she was the first to enter the Law Library in Dublin and was mentioned in the Irish Law Times of 14th January 1922 where it was commented “An interesting figure amongst the members of the Bar was Miss A. Deverell, who has joined the Law Library. She wears the regulation wig and gown” (I.L.T. & S.J., 1922).  Averil remained the soul female member of the library until June 1923 when Mary Dillon-Leetch joined her, but though greatly outnumbered this did not stop her from trying to become an active member of the Bar.

After her call Averil went on to become one of the few women in mid-20th century Ireland to make a career for herself at the Bar of Ireland. By 1922 she was recorded as the first woman appointed as a law reporter in Ireland. In January 1929 the minute books of the Bar Council record that she was appointed, along with five of her male colleagues, to the committee of the Bar Luncheon Room. This is followed by a further mention in June of that year that she was to be paid for a digest that she had prepared for the Library on cases decided since 1918 in Northern Ireland and which was to be kept at the Librarian’s table. She is also mentioned in the Irish Times in 1945 as laying the poppy wreath at the World War 1 memorial on behalf of the Bar and later again in 1954 she is listed as an attendee at the Michaelmas Mass celebrating the new legal year. These references demonstrate that throughout her career Averil was very much visibly involved in life at the Bar.

Becoming a fixed feature of the Law Library whilst building her career, a cursory search of the Irish Reports shows that she built up a sufficient legal practice, a feat in and of itself as many women struggled and failed to make a career at the Irish Bar. In 1928 we see her acting for the appellant in the Supreme Court alongside two King’s Counsel in the case of Murray & Ors v Minister for Finance, with further cases reported in the 1938, 1944, 1945, 1948 and 1951 Irish Reports. The Irish Times sees her listed as counsel in numerous cases throughout the 20’s, 30’s, 40’s and 50’s. The Bar Council minute books of December 1940 record that a letter was read from Miss Deverell requesting the provision of a First Aid outfit for the Four Courts, which she was subsequently asked to procure, and in 1950 and 1951 she further petitions on behalf of the women barristers for replacement carpet in the ladies dressing room and requesting the provision of an electric ring in their sitting-room which were duly authorised. In July 1959 she was proposed by Thomas Doyle as a member of the Bar Council and by November 1959 she was co-opted onto the Bar Council where she remained until December 1961.

Throughout her career she continuously advocated for gender equality in the legal profession, later becoming known as the ‘Mother of the Bar’ and mentoring a number of women lawyers. She remained committed in her career, which spanned 40 years, appearing in many cases, and giving numerous written opinions on tangled legal subjects, retiring in 1969 aged 76. In October 1970 it was decided by the Bar Council to make Averil an honorary life member in recognition of her jubilee anniversary which was to occur in 1971.

Averil remained in Greystones throughout her life. Whilst not practising at the Bar she bred Cairn Terriers and was an active member of Greystones Golf Club. She died in 1979, the same year Mella Carroll became the first Chairwoman of the Bar Council.

Averil’s call to the Bar in 1921 marked the progression of women into the Irish Legal System and the Averil Deverell room was opened in her honour by the Bar of Ireland in 2018 to remember her tireless work for equality in the profession. Her portrait hangs in pride of place in the Law Library in the Four Courts.